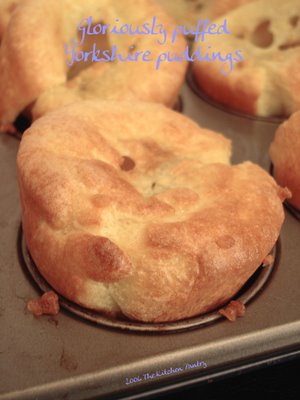 I’ve tried to make Yorkshire pudding twice. The first attempt was following a recipe form Traditional British Cooking, a book we bought many many years ago, using duck fat for the tins. They were good, but not what I except it: they were a bit heavy, not too fluffy and too “eggy”… and the duck fat didn’t work well: they almost all sticked in the bottom…
The second attempt was the one pictured above, form Nigella Lawson’s Feast: perfect! Right consistency, right fluffiness, perfect taste!
I am no chemist neither physicist (always had low grades in those subjects in high school…), so I don’t know how the tiniest different proportion between egg, milk and flour can make such a difference, but Nigella’s were much much much better!!!

Olive oil for the tin

Preheat the oven at 220° C.
Beat together milk, eggs and salt and let it stand for 15 minutes. Add the flour, give a good whisk and let it stand for at least half an hour.
In a 12 muffin tin, heat the oil in 8 of the holes in the oven. When the oil is sizzling, add the Yorkshire pudding mixture in each tin, filling it for about two third. Return it to the oven and let it cook for 20 minutes or “until they have puffed up gloriously” and they are golden.
Serve immediately!