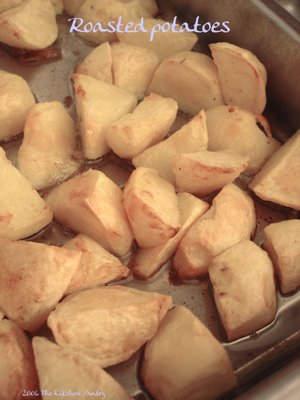 As you maybe understood, I am a big fan of some English tv chefs, as Jamie Oliver, Nigella Lawson and the often forgotten Nigel Slater. Nigel had a BBC program (among others), Real Food (even a book), in which he underlined in each episode a single type of food: potatoes, garlic, chicken…
I am a well known potatoes eater, so much that my father, when I was little, nicknamed me potato (in Italian doesn’t exist the neuter gender, so for us potato is a female noun)! I love potatoes in any shape or form: roasted, fried, boiled, steamed, jacked… Give me a potato and I will be an happy woman!
My search for the perfect roasted potatoes is going on since my first attempt of cooking. I read many recipes that were suggesting to shortly boil the potato chunks before to roast them in the oven, but it always sounded like too much fuss for something so simple… But it is not! It is the ONLY way to get a perfect crispy crust and a smooth, tender inside. They were so good! And they were wonderful even reheated in the oven the day after: still crispy!!!

Preheat the oven at 200° C.
Peel the potatoes and cut them in big chunks. Putt all the chunks in a saucepan full of cold salted water and bring to the boil. Cook for 5 minutes. Drain the potatoes.
In the meanwhile, put enough duck fat to cover with a thin layer the bottom of a big roasting dish. Heat it in the oven. When the fat is sizzling, add the potatoes (be careful with the hot splashes!), coat them with fat and cook in the oven, turning once, for 45 minutes or until golden.
Take them out of the oven, sprinkle with Maldon salt and serve straight away.