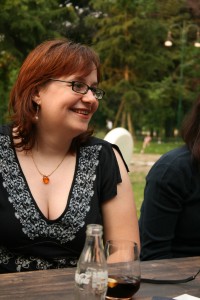 My name is Sara, also know from my teen years and on-line as Piperita. That is the Italian translation for Peppermint Patty, the Peanuts character with the red hair who was calling Charlie Brown, Chuck! And, as a matter of fact, I call my best friend from high school Chuck (Ciccio in Italian!).
I was born and raised in Italy, to be precise in Varese, near the Swiss border. Since graduation I live in Milan.
Since July 2003 I’m married to a French wonderful (beside his Frenchness!) man and together, before my graduation, we lived in France (Toulouse) and England (Bedford and Cambridgeshire). We are companions since 1995.
I have a Modern History PhD and my thesis was about the role played by women during the English Revolution of the 17th century. Though, eh? Not as much as it seems!
After graduation (2000) I began to work as web editor for various companies, then I became completely pissed and I decided to fulfil my passion for cooking and open a catering company with a (once) friend from university. It didn’t go very well (wrong method, wrong partner, wrong economical climate…) and I needed four year to realize that one of my dreams wasn’t yet ready to become reality.
Once emerged out of that nightmare (April 2007), a new life began and a clearer vision of what I am and what I could do appeared in front of me!
Until July 2008 I worked as a web consultant, web editor, and community manager: I wrote about food, I took pictures of food and I organize food events in Italy and England for an Italian food company.
From July 2008 to October 2008 I worked full time as a Community Manager for an Italian star-up: Codice Internet.
Since then I decided to devote myself only to the things that make really happy!

I have this blog since January 2006 (at another adress until August 2008) and it was the best thing could happen to me after my husband!!!

Picture by Pm10 with LaPaoly‘s camera